Get support for your next Facebook Live Paid Virtual Event

Paid virtual events are a fantastic way to keep visitors engaged with your attraction during lockdown, a chance to obtain some extra income and, as in the case of Mead Open Farm, could even lead to TV and radio coverage.

Facebook Live Paid Events are a new way of monetising your live online event. You can publish your event page, charge viewers a one-off fee, promote to customers and host the event, all in one place. Best of all, running your virtual event via Facebook is currently free of charge for hosts, meaning you take 100% of the ticket price.

With forced closure due to Covid-19 set to continue into the Easter Holidays for most attractions, now is the ideal time to jump on the virtual event bandwagon, however, things can quickly go off the rails if you haven’t fully prepared.

If you find this blog useful, please feel free to share it or join our email newsletter to ensure you never miss out.

Mead Open Farm would usually have guests ‘flocking’ to visit at this time of year to see lambing in action and to even take a turn at bottle feeding. Lambs were still due to arrive as usual at the Farm this February and the team were keen to share the special time of year with customers as they usually do. Unfortunately the farm park had to remain closed to the public due to the national lockdown.

The Farm had set up a Lamb Cam in previous years, which offered a free 24hr-a-day online video feed of the lambing barn. However, with plenty of other attractions offering free-to-watch virtual events, the team knew to successfully host a pay-to-watch event, they would need to differentiate their virtual event offer and produce higher value content for families to enjoy at home in lockdown.

To throw a huge spanner in the works, all of the ewes at the Farm were due to have their lambs just 4 days after the initial event brief, meaning an extremely tight turn around to sell tickets and get everything set up in time if we were to have any chance of actual lambing happening at our lambing event!

We promoted the event by posting live video ‘teasers’, and images of some of the new arrivals organically across social media channels as well as running a competition. We emailed the existing customer database and we also put a small budget behind paid Facebook event ads. We chose only to use Facebook paid ads rather than spreading across other networks; we had minimal budget and as the event was hosted within Facebook, the Facebook ads offered a direct call-to-action.

The ads were targeted to our existing customers across several custom audiences.

We knew that as we weren’t restricted by drive times, we could pull from further afield and widen our geo-targeting if we wanted to (one viewer tuned in from 450 miles away in Scotland!), but we wanted to use the small budget we had to target the low hanging fruit which was our existing customer base.

How Did it Work?

We agreed that, wherever possible, the event should be similar to a real day experience at the Farm Park. This would mean 8 continuous hours of livestreaming from the farm to match the usual opening hours!

We knew it would be tricky to keep viewers engaged for such a long period, but were up for the challenge! To give structure to the event, we devised a timetable of scheduled activities for viewers to ‘join’, alongside continuous video footage of the lambing barn. We scheduled fairly long breaks of 1-2 hours between activities through the day. This format was intended to allow viewers (especially those with young children) to drop in and out of the event as they pleased, without feeling they were missing too much and it also allowed time for the team to cover any live births that happened during the day and ad hoc activities.

The key to producing high quality content and justifying the ticket price, was setting up a live streaming software for the Farm team and training them to manage the stream. This enabled seamless handovers between different areas of the farm, branded titles and alerts appearing on screen and a way for the different areas of the farm to communicate, offering a richer experience. A great benefit was the ability to split screens, so we could continue to show the lambing barn, whilst the roaming camera visited timed activities. A third camera was in the ‘studio’ to keep viewers engaged for the full 8 hours, with interactive Q&A’s and shout outs, fun polls and more. The studio also allowed a ‘backstage’ area where we could communicate and advise the team from behind the scenes.

Interacting with viewers by reading their comments and questions out loud from the studio for the farmers to answer really generated an engagement buzz! The more we interacted with the viewers, the more engagement we generated and the comments kept rolling in for the full 8 hours. We found we needed at least one moderator on the comments throughout the entire event to keep up and feed the questions into the backstage area to keep everything running smoothly. The personal viewer engagement (using viewer names!) was a big part of the perception of value for money, so it is wise to cap visitor numbers, especially for your first event, if you want to be able to engage with everyone.

The payment/booking system within Facebook is extremely glitchy (often the case with new feature roll outs on Facebook!), and lots of customers contacted us for help. In most cases we were able to resolve the issues for them, but an alternative way for visitors to pay and access the event would be a good workaround.

Keeping the event in Facebook was key to fueling the engagement and buzz which made the event a success so we wouldn’t want to move away from the platform. The structure of the day and the opportunities for viewer interaction were also important for generating engagement.

Depending upon how far speakers are from the microphone and how much background noise there was (mainly from woolly friends in the barn!), sometimes the audio could be a little bit muffled, especially when using phones as extra roaming cameras. Investing in some equipment would further improve the production quality.

We were delighted to secure TV coverage of the event with BBC Look East, who covered the story on the lunchtime, evening and late news. We also secured Radio coverage with BBC 3 Counties radio – great awareness at time when Mead Open Farm was closed.

251 tickets were purchased for the event and (bearing in mind the a tight turn around for the event and that tickets launched only 3 days before we went live) we felt that this was acceptable, but have our sights set much higher for next time with a longer lead time.

Our live viewership was consistently around 150-180 watchers throughout the day, with viewers dropping in and out during the day when it suited them, which worked well given the length of the day.

The team worked very hard to make the Virtual Event a great experience for all those who had paid to join and to ensure great value for money.

All of the feedback from viewers was exceptional, from both those who’d never been to the farm before and from regular guests and members who appreciated the opportunity to connect with the farm again. Many viewers commented on the professionalism and production quality of the stream, which they felt added so much to the experience. The icing on the cake for the viewers was the chance to watch 5 live lamb births with commentary from the team as they happened!

Posted on 25th February 2021 by Agility This entry was posted in Online Marketing, Website developments. Bookmark the permalink. 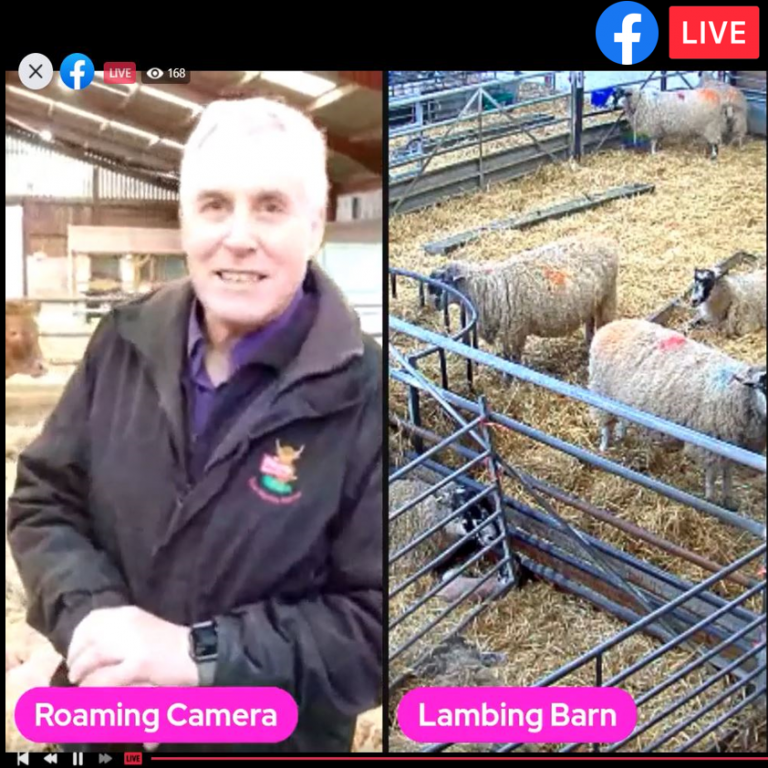